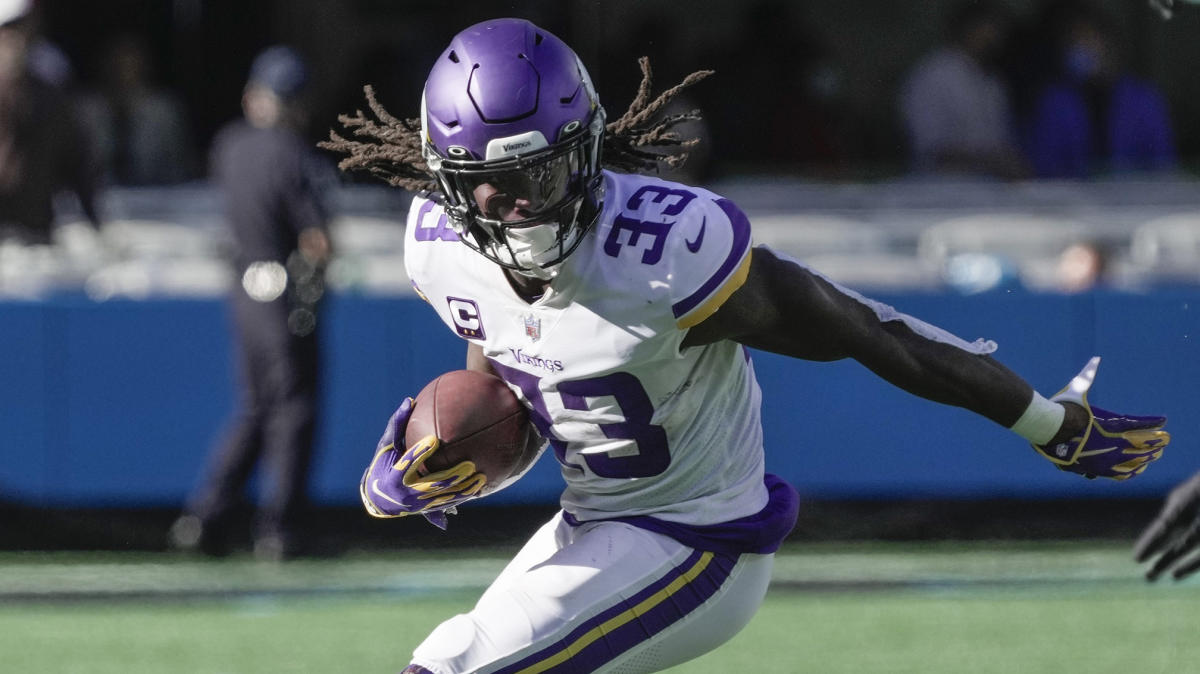 Dalvin Cook searches for touchdowns in Philadelphia, Nick Chubb greets a plus matchup in the Jets, and Najee Harris hopes for fantasy redemption against the Patriots.

RB Notes: Jonathan Taylor rushed for the fifth most yards of his career in Week 1. Even with a whopping 50 Matt Ryan pass attempts in a tie, the Colts’ Taylor commitment remained as clear as ever. … The song remains the same for Christian McCaffrey, including this being a bad team. That doesn’t matter since the Panthers seem to have zero desire to change CMC’s near every-snap usage. … Austin Ekeler played just 49 percent of the Chargers‘ snaps in Week 1 … and handled the ball 18 times. It is possible coach Brandon Staley already had one eye on Thursday night. Even though the Chargers would understandably like to lighten Ekeler’s load, the requisite high-value touches are not going anywhere. … Saquon Barkley‘s Brian Daboll debut featured 24 total touches, the hoped-for big plays, the forecasted receptions and the desired red-zone work (five handles inside the 20). An aggressive move up the ranks was the only defensible course of action. … Kevin O’Connell knew what to do with Dalvin Cook in Week 1, getting him on the field for 77 percent of the snaps and shoveling him 23 touches. With a 50.5 over/under for Monday Night Football, Cook’s Week 2 results should match O’Connell’s process.

Dontrell Hilliard got the glory with his change-of-pace handles, but the Titans made it clear in Week 1 they will not be changing their Derrick Henry approach. The Week 2 concern is potentially awful game flow vs. the Bills. Vegas has the Titans pegged as shocking 10-point ‘dogs. Different teams, yes, but the Titans got the Bills a year ago. … Even with Jamaal Williams‘ vulture jobs, D’Andre Swift‘s 175 yards from scrimmage vs. the Eagles were a new career high by 26. The Commanders’ surprisingly robust offensive attack in Week 1 has this looking like another good environment for Swift. He has said his ankle “injury” is a non-issue. … Coming off a 34-touch opener, Joe Mixon is sitting pretty with the Bengals touchdown-plus favorites vs. the decrepit Cowboys. … Not even Jacoby Brissett‘s molasses-slow pace of play could hinder Nick Chubb in Week 1. Kevin Stefanski has maybe the best pure runner in football and knows what to do with him. Cleveland is 6.5-point home favorites against the typically-laughingstock Jets. … Leonard Fournette tweaked his hamstring near the end of Sunday evening’s dominant performance in Dallas. Soft-tissue issues have been of increasing concern for the 27-year-old runner, while he must now deal with the Saints’ stout run defense.

I frankly thought Alvin Kamara‘s dialed-back Week 1 usage was a good thing. We know he did not hold up well under last year’s punishing workloads. As for his lack of targets in Atlanta, it is difficult for the quarterback to check down when you are trailing 16-7 and 26-10 after the break. Kamara’s bigger Week 2 concern is the Bucs’ elite defensive front. … Najee Harris is poised to play through his foot issue. Effectively? That’s a different story. It was only one game, but this offense had the looks of one of the league’s worst vs. the Bengals. … We needed something, anything to separate Javonte Williams and Melvin Gordon in Week 1, and Williams out-targeting his veteran backfield mate 12-2 was hopefully it. It’s not just the targets, but the game script in which they were received. With everything on the line, it was Williams not only in the contest but serving as the focal point for his new quarterback. We have to be careful not to overinterpret one game, but what a one game it was. … AJ Dillon swept Aaron Jones in every Week 1 stat that mattered, including red-zone usage. Perhaps this is an overreaction. It’s also the continuation of a trend, as Hayden Winks points out. I had to make the rankings switch.

Dig deeper into the Antonio Gibson data as Pro Football Focus’ Nathan Jahnke did, and you find the Commanders’ J.D. McKissic commitment was still fairly robust, particularly on third-and-long and in the hurry-up. Week 1 may have been Gibson’s best game of the season. The problem/good news is, the Lions are a great spot to point chase. … Were CEH’s Week 1 numbers lucky production in a blowout? It’s possible. His workload would have also been greater were the game more competitive. High-value touches should be on the way for Thursday evening’s likely shootout with the Chargers. … I’m not sure what mind games Sean McVay is playing with Cam Akers, but I do know we have to admit immediate defeat and install Darrell Henderson as the rankings winner until further notice. The Falcons are a plus bounce-back spot for all involved. … There is no way 25 touches were the Cordarrelle Patterson plan. There is also no way that will be repeated against the Rams even if Damien Williams (ribs) sits. Williams was absent from Wednesday’s practice. If he can’t go, Tyler Allgeier/Avery Williams will be up and take some of the less-forgiving touches off C-Patt’s plate. … James Robinson dominated Travis Etienne on Week 1 early downs, especially after Etienne fumbled. Etienne was not fully mothballed, but this has the looks of a situation where we are going to want to collect some more data.

J.K. Dobbins (knee) is on track to make his 2022 debut. Treat him as a low-floor FLEX as he proves his health. … With Ken Walker (hernia) set to make his NFL debut, Rashaad Penny gets relegated to the FLEX bin after his disappointing Week 1 workload. … Jeff Wilson is a born role player. Harness your hopes if you were expecting an RB2 off the waiver wire. Wilson is a FLEX with an unpredictable workload. Jordan Mason and Tyrion Davis-Price could both mix in. As speculated elsewhere, it’s possible TDP was inactive for Week 1 solely because he does not play special teams. … I didn’t find much to call home about in Josh Jacobs‘ Week 1 usage. He got 11 touches in a competitive contest. It was arguably too competitive. With the Raiders 5.5-point home favorites vs. the alarmingly-bad-in-Week-1 Cardinals, Jacobs gets a little benefit of the doubt. … The Patriots’ Week 1 backfield was one of fantasy’s true disasters. Rather than giving Rhamondre Stevenson increased opportunity to make plays, the Pats gave Ty Montgomery the third-down job. Now Ty Mont is on injured reserve and Stevenson gets another shot. Stevenson is still on probation, but I believe he has more ways to help fantasy managers than Damien Harris. … Words are words, but Texans coach Lovie Smith mea culpa’d about as hard as he could have on Dameon Pierce‘s lack of Week 1 work. Give the impressive rookie another week.

How to watch Thursday night’s Chiefs-Chargers game on Amazon in KC, Wichita and beyond

The type of traveling that is more than OK