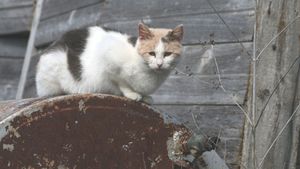 A Sewickley Township woman was sentenced to eight years of probation after being convicted of 61 counts of animal neglect. The animals taken from her home were to be forfeited to the Humane Society.

Nicole Marzole, 42, was not present at the nonjury trial Tuesday, according to Channel 11 news partner the Tribune-Review.

She must pay almost $650,000 in restitution, according to the court order.

The charges were from a 2019 report that Marzole and Karl Kuhn had 39 animals, including cats, rabbits, goats, ducks and a dog and chicken, living at their home in deplorable conditions.

After giving the pair 10 days to fix the situation, a humane agent seized the animals when their living conditions did not change.