Why Deshaun Watson's towel habit was key in his suspension ruling 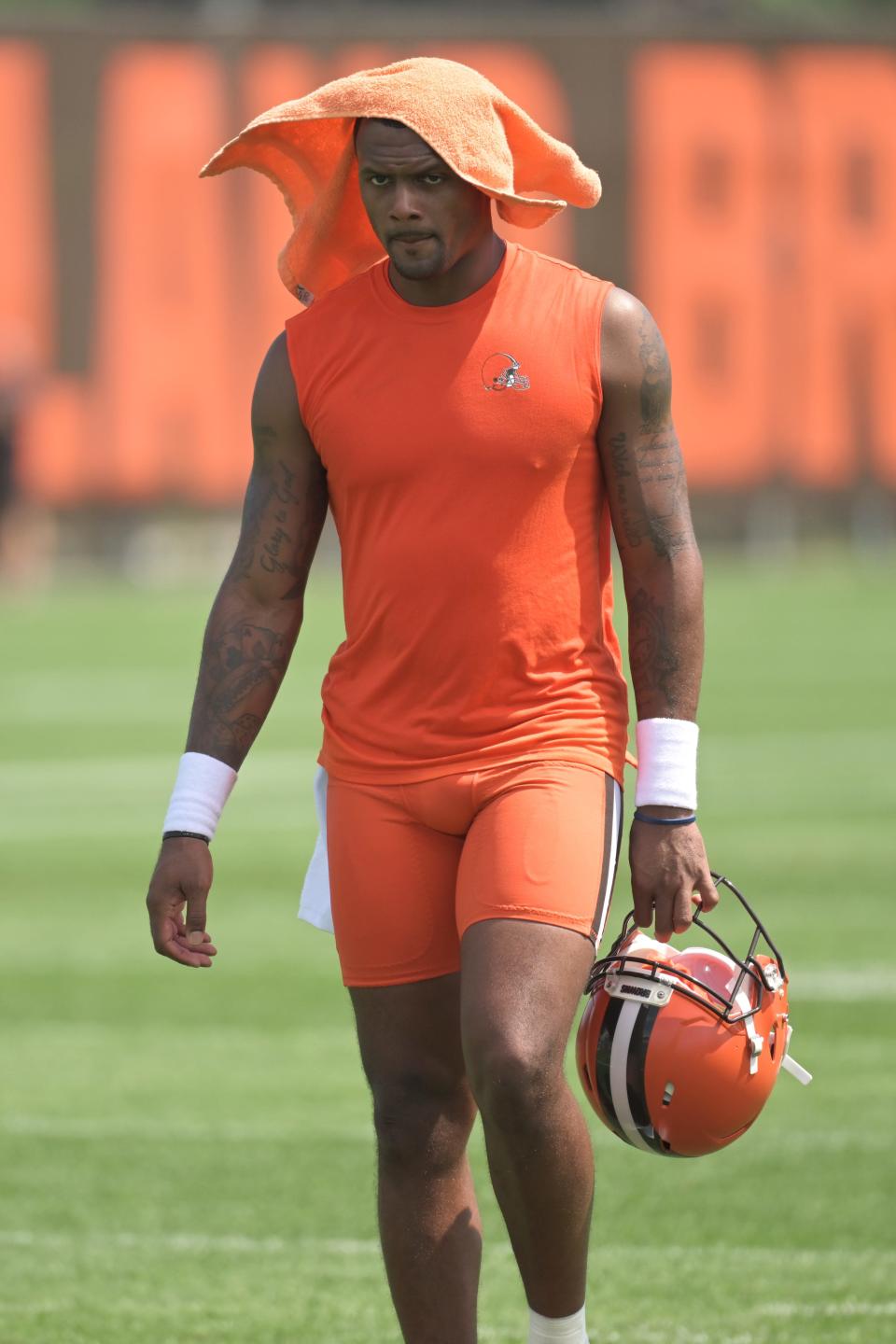 Judge Sue L. Robinson issued her decision against Deshaun Watson Monday with a written ruling that mentions a certain piece of evidence nine times in 16 pages.

It’s about his towel habit.

The Cleveland Browns quarterback liked to use a towel to drape himself in massage sessions instead of a larger sheet and sometimes even brought his own small or medium towel, according to court records.

Why does this matter?

Robinson, the NFL’s independent disciplinary officer, handed down a six-game suspension against Watson Monday after he was sued by 24 women who accused him of sexual misconduct in massage sessions in 2020 and early 2021. Her ruling noted the towel evidence nine times, helping her conclude that Watson had a “sexual purpose” in these encounters.

Professional massage therapists typically provide larger sheets to drape clients as a way to avoid unwanted exposure of their clients’ private parts. In these cases, the women generally said Watson exposed his genitals to them in massage sessions and caused his genitals to touch them – conduct that was made easier by his insistence on using a smaller towel instead of a sheet, according to Robinson’s ruling.

“Watson reached out to women whose professional qualifications were unknown and unimportant to him,” Robinson stated in her ruling. “He insisted on using a towel, increasing the probability of exposure. He insisted on having the therapists focus on areas of his body that not uncommonly triggered erections. And he engaged in this pattern of conduct multiple times.

“I find this sufficient circumstantial evidence to support the NFL’s contention not only that contact occurred, but that Mr. Watson was aware that contact probably would occur, and that Mr. Watson had a sexual purpose – not just a therapeutic purpose – in making these arrangements with these particular therapists.”

The NFL had investigated the evidence against Watson since last year and tried to convince Robinson that he violated the league’s personal conduct policy and should be suspended for it.

The towel evidence helped Robinson reach that conclusion and determine he engaged in sexual assault against four women whose testimony was emphasized by the NFL in its case against him.

After a three-day hearing in June, Robinson, a retired federal judge, used a three-part test to determine whether he committed sexual assault as defined by the NFL: Did he intend to cause contact with his penis? Did he do so for a sexual purpose? And did he know such contact was unwanted by these women?

The towel evidence helped show his intent and purpose, according to her ruling, which also found that Watson knew such sexualized contact with these women was unwanted by them. Robinson noted Watson’s intent in these encounters “must be inferred from circumstantial evidence in the absence of an admission.”

“There is no dispute Mr. Watson preferred a towel to the traditionally used sheet for draping, and there should be no dispute that a medium or small-sized towel will more likely slip off a body than a sheet, leaving a client exposed,” wrote Robinson, who was jointly appointed to her position by the NFL and the NFL Players Association.

Robinson ruled that the “totality of the evidence,” including his use of towels and his focus points for the massages, lends support to her conclusion that it is more probable than not that Watson did have erections and that his erect penis made contact with the therapists, as they claimed.

Of the 24 women who sued Watson, Robinson’s ruling notes that NFL investigators were only able to interview 12, and that of those 12, the NFL relied for its conclusions on the testimony of four, along with other evidence and third-party interviews. All but one of those 24 lawsuits since has ended with a confidential settlement, according to the attorney for the women, Tony Buzbee.

Watson, 26, has denied wrongdoing and was never arrested or charged with a crime. He has not disputed his towel preference.

He testified about it in a pretrial deposition May 13.

“This is the towel I’m gonna use,” Watson said he told a massage therapist in March 2020, according to the deposition transcript obtained by USA TODAY Sports.

That was in the case of massage therapist Ashley Solis, who said Watson exposed himself to her and caused his genitals to touch her without her consent.

Watson’s attorney, Rusty Hardin, previously told USA TODAY Sports this was a personal preference for Watson and not evidence of any unwanted intent. “He’s always made it clear that for comfort reasons, he wanted the least draping possible that still covered him,” Hardin said in June.

‘Why did you bring a towel?’

Watson also was asked about it in the deposition in May.

“Why did you bring a towel?” plaintiffs attorney Maria Holmes asked him.

“Because that was – we talked on the phone and I told her I was bringing a towel,” he replied. “We communicated with that and that’s how it was.”

His towel habit became known as his “towel trick” in some circles and was mentioned in pretrial deposition testimony by a Houston police detective who investigated complaints about Watson’s behavior.

In another case, Watson testified in a deposition he drove about 25 miles south of Houston to get a massage at a woman’s mother’s house, where he brought a towel and a non-disclosure agreement for the woman to sign.

“You’re sitting there in your car, in Manvel, (Texas), with your towel and your NDA waiting for her, right?” Buzbee asked him.

“I guess if you make it seem that way, yes sir,” Watson replied.

That case and the Solis case were among the four cases stressed by the NFL in this disciplinary proceeding with Robinson, according to clues in her ruling.

A massage and spa industry expert told USA TODAY Sports that most massage therapists use single-sized sheets for draping, often covering the top sheet with a blanket.

“Those who use towels usually use beach towels, bath sheets or large bath-sized towels,” said the expert, Felicia Brown, who is not involved in the Watson cases. “Hand towels and wash cloths are not generally used for draping the groin areas as they do not provide adequate coverage, warmth or boundaries for a massage.”

She said draping is designed to provide warmth, privacy and modesty to their clients, sanitation for equipment and a physical boundary between the therapist and client.

“It is quite uncommon for clients to bring their own towel or draping to a massage and unlikely a female massage therapist would be comfortable with a male client doing so,” she said.

In her ruling, Robinson noted Watson requested that the therapists use a towel to cover his private parts rather than the more typically used sheet.

“Mr. Watson often provided his own towels, which have been variously described as ‘medium/small’ towels or ‘Gatorade’ towels,” Robinson wrote.

The NFL previously sought an indefinite suspension of at least one season and could appeal Robinson’s ruling to lengthen it beyond six games.

Shanshan Feng got everything from golf but a proper farewell