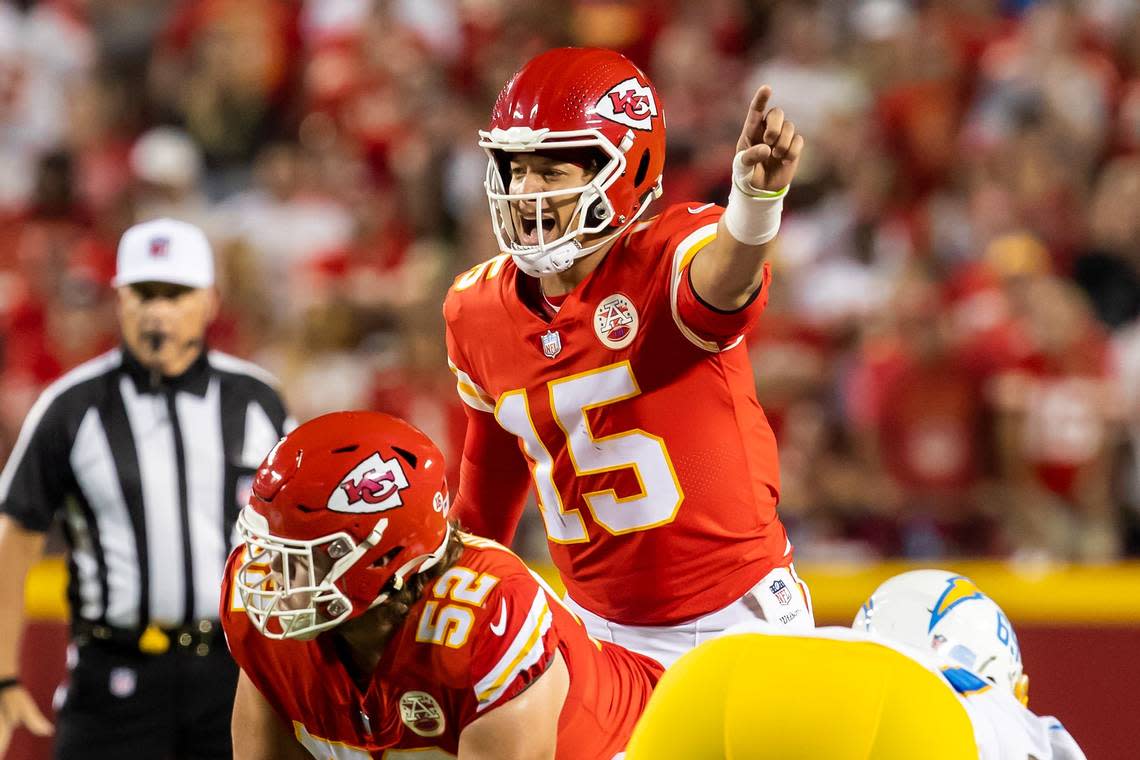 A conversation began in a corner of the Chiefs’ locker room late Thursday, the corner the team’s defensive linemen call home on game days, before it trickled to spots elsewhere. For the record, Derrick Nnadi was the first to bring it up.

The game in which the Chiefs had just completed — a 27-24 win against the Los Angeles Chargers — had reminded him of something.

The Chiefs beat the Chargers, their most likely roadblock to a seventh straight AFC West championship, not because they were at their best, but rather despite the fact they were not.

It’s a telling victory in that way, a potential omen for what awaits. You’d probably feel a little better about the next four-plus months if the Chiefs looked more like their Week 1 outing than they did Thursday night.

This has the chance to be longer lasting.

In 2019, the Chiefs adopted a quality over time, one that would come to define the back half of their regular season and eventually their postseason. On most weekends, they were the better team on the field and played like it.

Few teams can accomplish that, and back then, it required just the right recipe. A big play. An unlikely hero.

Few bigger or more unlikely than one that arrived at the onset of the fourth quarter Friday — Jaylen Watson, a rookie and seventh-round draft pick, stepping in front of a pass and returning it 99 yards for a tie-breaking touchdown.

And suddenly, on a night in which they had maybe their C+ effort, the Chiefs led for good.

“We’ll look back on it at the end of the season and say that was a big win for us,” Mahomes said.

The Chargers built their roster to win this game. Think about that. They threw loads of cash at cornerback J.C. Jackson to counter the Chiefs’ weapons on the outside. They acquired Khalil Mack on the edge to ensure they could pressure Mahomes while rushing just four. And, well, it worked. Their defensive line dominated large segments in both the pass and the run games.

Their stars played like stars. Justin Herbert outplayed Patrick Mahomes. Mike Williams played like an All-Pro for a half. Joey Bosa was the best player on the field. The Chargers led by double-digits not once but twice. They out-gained the Chiefs by nearly 100 yards. It doesn’t make sense.

The Chiefs responded with a definitive message.

“Some games like that when the offense played like we did today — because we didn’t play our best football — a lot of times we lose those games,” Mahomes said. “For the defense to keep us around, it’s a big, big step in the right direction.”

There’s where 2019 comes into play. It would be easy to make these sorts of comparisons after every comeback. But this isn’t a comparison of a singular playoff comeback against the Texans. Or the Titans. Or anyone else.

It’s not even about the comeback at all, really. It’s about finding a path toward the best result when the product itself seems insufficient. It looked pretty bad in the first half Thursday. Felt like the Chiefs were lucky to still be in the game. To still have a chance.

Four weeks into that 2019 season, the Chiefs took a trip to Detroit. They allowed a 100-yard rusher; they allowed Matthew Stafford to throw for 291 yards and three touchdowns; Mahomes did not find the end zone once; and the Chiefs turned the ball over three times.

And they won. It didn’t make sense.

There was a defensive touchdown that day too — it covered 100 yards, not just 99. But just a month into the year, the talk after that game was pretty consistent: If they could win that game, they could win any game. You could feel that they felt that.

This win has the opportunity to provide the equivalent this season. The Chargers are good enough to win the Super Bowl — the quarterback, the rebuilt defense, the weapons at running back and receiver. And they played good football Thursday, minus a play here or there.

If the Chiefs can win that game, well …

“It builds character. It builds confidence,” Chiefs safety Justin Reid said. “It builds belief in what we do in that no matter what’s happening on the field, we stick together.”

‘How do I watch the NFL on Amazon?’ It’s going to cost you

COPENHAGEN, Denmark (AP) — Finland’s border with Russia was closed to Russians with tourist visas Friday, curtailing one of the...