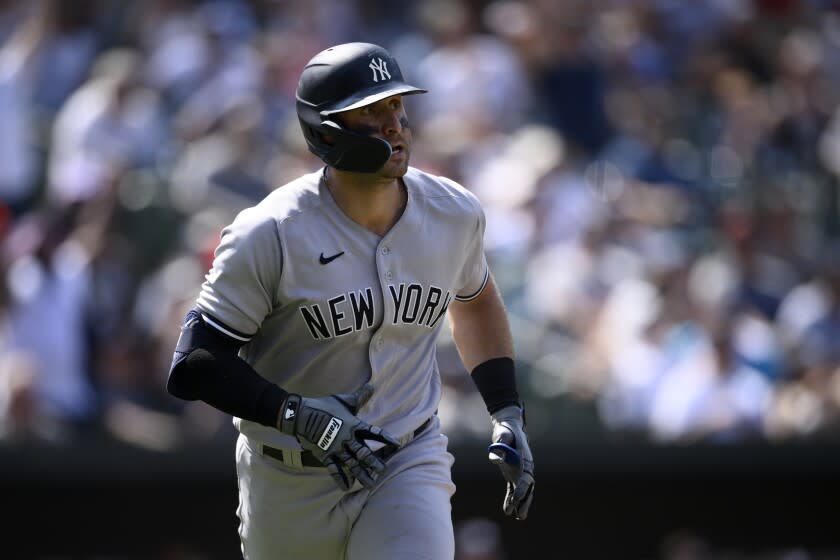 “Man,” the Dodgers manager remarked after the deadline passed. “A lot happened.”

Just not for his team.

While the San Diego Padres drastically altered their lineup around the addition of Juan Soto, other National League contenders such as the New York Mets and Atlanta Braves made notable additions to their big league roster, and every club but the Colorado Rockies executed at least one deal, the Dodgers stayed relatively quiet.

They were outbid for Soto, making a strong push with a prospect-laden offer but finishing as the runners-up in the bidding for the 23-year-old superstar outfielder.

They abandoned their pursuit of Miami Marlins starter Pablo López, with an inflated pitching market driving his cost too steep.

They couldn’t find the right price point in negotiations for other bigger-name options, such as slugger J.D. Martinez of the Boston Red Sox, a target they pursued up until the 3 p.m. cutoff time.

And in the end, the only real change they made was effectively replacing part-time outfielder Jake Lamb, who was traded to the Seattle Mariners, by taking a flier on Joey Gallo, the former two-time All-Star who had been struggling for the New York Yankees and was acquired for only one pitching prospect.

“I feel good about how aggressive we were in trying to line up on different things, the things that we ultimately did,” president of baseball operations Andrew Friedman said.

But ultimately, he added, “I feel good about the team we have in place and the way they’ve performed … A lot of that stems from a special dynamic we have in place, as well as the talent we have here and the talent returning in the next two to six weeks.”

Friedman, of course, hasn’t been afraid of blockbuster deals in the past. It was at the deadline he acquired Yu Darvish in 2017, Manny Machado in 2018 and Max Scherzer and Trea Turner last year.

The calculation this season, however, was different.

The Dodgers began the day with the majors’ best winning percentage and team pitching ERA, as well as the second-most runs scored.

They had a 12-game division lead, and were already almost assured of making the playoffs.

They didn’t feel like they had any obvious pressing needs, either, confident a banged-up pitching staff will be close to full health by the start of the playoffs and the few struggling bats in the lineup will heat up down the stretch.

“It is the most expensive time of the year to acquire players,” Friedman said. “I guess maybe we were quiet outwardly, but there was a lot going on.”

The Dodgers’ biggest addition was Gallo, who was one of baseball’s most prolific left-handed sluggers earlier in his career with the Texas Rangers but had struggled since being dealt to the Yankees this time last year.

With the Dodgers, Gallo will likely serve in a platoon role — he has been slightly better against right-handed pitching this season — and play defensively in left field, where the team hopes the two-time Gold Glove player can also make an impact.

“A year ago, he was worth a lot in the industry,” Friedman said. “The true talent level remains … We feel there’s some real potential upside.”

Lamb, who had been occupying a similar role in recent weeks, was dealt to the Mariners in a different move for either a player to be named later or cash.

The Dodgers also traded fringe big league pitcher Mitch White to the Toronto Blue Jays for two pitching prospects — helping free up roster space for the litany of pitchers expected to come off the 60-day injured list before the end of the season.

That injured group was another factor in Tuesday’s lack of activity from the Dodgers, whose only other notable pre-deadline move was acquiring middle reliever Chris Martin last week.

And while Friedman acknowledged the team is “not relying on all of them coming back and being great,” they expect to get enough reinforcements — especially from Buehler, May and Treinen — to internally bolster a pitching staff that has still performed like one of the sport’s best.

“We feel really good about the potential of what our pitching staff can look like in October,” Friedman said.

Roberts felt the same way about the entire team.

“I like the ballclub we have,” he said. “And so for us to not kind of reach to do something, I think everyone in that clubhouse understands.”

Still, while the Dodgers certainly aren’t getting any worse, many of the sport’s other contenders might have rapidly gotten better.

The Braves and Mets, already the NL’s next two best teams, shored up their rosters in recent days. The Braves got reliever Raisel Iglesias, outfielder Robbie Grossman and starter Jake Odorizzi. The Mets added Phillip Diehl to their bullpen and Darin Ruf, Tyler Naquin and Daniel Vogelbach to their bench.

And then there were the Padres, who in addition to Soto also added productive hitters in Josh Bell and Brandon Drury to their lineup, as well as the supremely talented but recently inconsistent Josh Hader to their bullpen — giving them the kind of lineup and pitching depth that could challenge the Dodgers in a postseason series.

“They made their team way better in the last couple of days,” Friedman acknowledged. “We look forward to that competition.”

Asked whether the gap between the Dodgers and the rest of the league’s top teams had closed, the manager didn’t disagree.

“Absolutely,” he said. “I would be not telling the truth if I didn’t think that, so that’s totally fair.”

And yet, he maintained total faith in the Dodgers’ present and future, confident that by protecting most of their farm system and not forcing trades they felt were overpriced, the Dodgers kept themselves well-positioned for the rest of this season and beyond.

“I think if you look at the system, the assets, the players we still have, we can do that,” Roberts said. “So that’s kind of how we feel. We feel great about our ballclub right now for this year and looking out to the future.”