World’s oldest tennis player, 97, urges Ukraine to ‘be an example for Europe’ and remembers his ‘good life’ in the Soviet Union 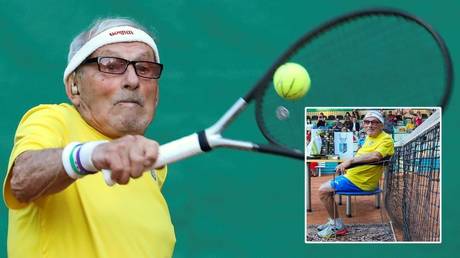 The world’s oldest tennis ace has revealed some of the secrets of his longevity, what it was like to play with Rafael Nadal, his memories of the “good life” in the Soviet Union and his desire for Ukraine to lead the way in Europe.

Leonid Stanislavsky was born in Kharkov in 1924 to a pair of doctors who wanted him to go to medical school.

Instead, he pursued his interests in aviation, attending the Moscow Aviation Institute while the family was evacuated to Novosibrik during World War II.

Working in an aircraft plant, he eventually became the head of the department, overseeing mining enterprises while writing and publishing around 100 scientific articles.

Working at the Gipropuda Institute for over 30 years, his key interest away from work has always been tennis and he is now, at 97, its oldest professional player in the world.

As a serial medalist of veteran tournaments, he still trains three or four times a week and met Rafael Nadal this year through being in the Guinness Book of Records, even playing in a competition on the Spaniard’s home isle of Mallorca.

“[I felt] inexpressible feelings,” Stanislavsky told KP about meeting Nadal, who he calls “the greatest tennis player in history”.

After meeting @RafaelNadal, Leonid Stanislavskyi (97 years old!) asked us if he could visit the #RafaNadalMuseum! 😍 pic.twitter.com/jmhEoSG0sz

“He won 20 Grand Slam singles titles and is a friendly, helpful and nice person. After a five-minute duel, Nadal himself took a felt-tip pen and signed my T-shirt with Ukrainian symbols.

“Frankly speaking, I have always been rooting for [Roger] Federer, but Nadal… treated me attentively and respectfully.

“I really enjoyed meeting Nadal. I got to know Federer at Wimbledon in 2017. Playing Federer is an impossible dream. Of course, I still have hope, but in order to be brought together with Federer, a lot must come together.

“As a tennis player, I really like Serena Williams. I would like to see her, but these are all dreams.”

Ukrainian tennis boss Georgievich Burko has promised to take Stanislavsky to the US Open and Wimbledon if he lives to 100 – an achievement which he concedes will be “very hard”.

“Honestly, I fight for every day I live,” he explained. “At my age, playing tennis is not easy. But I continue, nonetheless. I even go abroad.

“This year, I went to Spain myself [to meet Nadal]. Nobody accompanied me. It is not simple. They only helped me at the airport, put me on a stroller and took me onto the plane.

“I try to eat right and not eat much. I don’t overeat. I try to live peacefully, modestly and not [stress] myself. I try to be sociable.

“I don’t argue with people. I lead a sporty lifestyle. I pay attention to physical training every day. Unfortunately, it’s not possible to walk 10,000 steps a day, as the doctors recommend.

These photos are just 🤩 🤩 🤩 pic.twitter.com/Q2uV8YvNsI

On the advice he would give to young people, Stanislavsky offered that they should try to be “modest and honest” and “strive to develop and achieve their goals”.

“Work on yourself all the time, even if you have achieved significant success in your career. You must always continue to work on yourself,” he suggested.

“And, of course, travel more, see as many countries as possible. Until now, I have not been to Germany, Italy, France, Switzerland, Monaco. Despite my advanced age, I want to visit these countries.

“You need to live your life with dignity. Don’t think about anything, worry less. Live and live.

“There are many questions in our everyday life, from sex to love, from career to family – all of this makes up our being. The most important thing in life is to depend less on [others].”

Harking back to what he sees as the good old days, Stanislavsky admitted that he is a “Soviet person”.

“I do not neglect the past of the Soviet Union,” he said of his formative years. “I do not like it when the USSR is contemptuously [refered to].

“I think that we, the inhabitants of the USSR, had a very good and [positive] time. We lived poorly but we had everything.

“I didn’t throw away my Komsomol and party cards. I had a good life in the Soviet Union. I didn’t think I would become famous then. But tennis made me [famous], although I am a simple amateur.”

Stanislavsky sees Ukraine as a “very promising country”. “We are the richest country in Europe,” he claimed.

“We have ore, we have manganese. But you can’t melt steel without manganese. We have gas, uranium, gold, black earth.

“We are at the crossroads of seven borders. We have intellectually developed and hardworking people.

“We could be an example for Europe. The Ukrainian people should live richly. And that will happen. I believe in it. I believe in Ukraine.”

“You Reply On Twitter, Can Reply Here Also”: Court To Maharashtra Minister