People Who Have Ghosted In Relationships Are Sharing Their…

‘You speak to people in confidence’: Man Utd boss Solskjaer reacts to video of Ferguson criticizing Ronaldo omission to Khabib 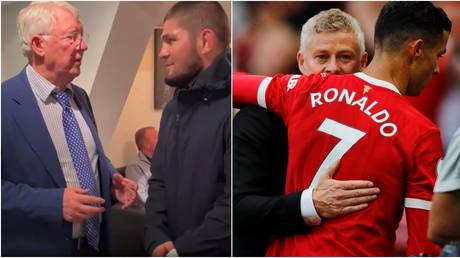 Ole Gunnar Solskjaer claims he is “relaxed” about footage showing Manchester United managerial legend Sir Alex Ferguson appearing to criticize his omission of Cristiano Ronaldo from the staring line-up for the game with Everton.

Ferguson’s conversation with UFC icon Khabib Nurmagomedov – who was a guest at Old Trafford for the Premier League clash with the Toffees earlier this month – was shared on the Russian star’s Instagram account but has now been muted.

In the original clip, Ferguson was heard suggesting to Khabib that Everton would have been handed a boost when they saw Ronaldo wasn’t starting the match.

After Khabib noted that Ronaldo had been brought on in the second half, Ferguson added: “I know, but you should always start with your best players.”

Here is a since deleted video (with audio) of Khabib Nurmagomedov talking to Sir Alex Ferguson about Manchester United and Cristiano Ronaldo. pic.twitter.com/WQzsTujYV4

The comments were taken by many as criticism of Solskjaer, not least after Everton battled back for a 1-1 draw.

Ronaldo had come on in the 57th minute but was unable to add to his tally of five goals in six games since he rejoined United from Juventus in the summer.

At the end of the game, the 36-year-old star was seen storming off down the tunnel.

Ahead of United’s Premier League meeting at Leicester on Saturday, Solskjaer dismissed suggestions that he felt undermined by the comments from former boss Ferguson – but said they should have remained confidential between the Scot and Khabib.

“I’m quite relaxed about it but, of course, it’s not really fair on the gaffer that something like this gets broadcast,” Solskjaer told the press.

Ronaldo picked up the Premier League Player of the Month Award for September, a sign of the impact he has had since his return to Old Trafford.

However, Solskjaer’s team have often been unconvincing despite lying fourth in the table with 14 points from their seven games.

“We all want to see Cristiano,” Solskjaer added. “We all want to, because he’s unique, he’s different, he’s had a career and everyone wants to come and watch him.

“But the plain fact of it is he cannot play every single game that we play, that’s just physical nature, human nature.”

The Norwegian added that given Ferguson’s lengthy tenure as United boss, he would no full well the pressures of balancing a talent-packed squad.

“He knows how difficult this job is anyway, the gaffer,” said Solskjaer.

“He didn’t always play the same XI. He took some risks at times to rest Ryan Giggs, Wayne Rooney or David Beckham, the best players that we had. Sometimes it works, sometimes it didn’t.”

Solskjaer added that Ronaldo’s tunnel tantrum after the draw with Everton was also not an issue moving forward.

“I know him from before and if you lose two points later like Cristiano felt like there and then, that’s natural,” he added. “I want my players to not be happy with a situation.

“I spoke to him before the game, spoke to him after the game and he was ready to come on when he was called upon.

“Unfortunately when we don’t win Cristiano is not happy and that’s a mindset that you want from every player. That’s absolutely no problem whatsoever.”

Ronaldo did not seem to let his frustrations linger after the match, being filmed laughing with his friend Khabib after sharing a jokey face-off with him.

The Portugal icon has since played for Portugal during the international break, hitting a hat-trick against Luxembourg in their World Cup qualifying match to extend his record international tally to 115.