US Open 2021: Novak Djokovic will face Alexander Zverev in… 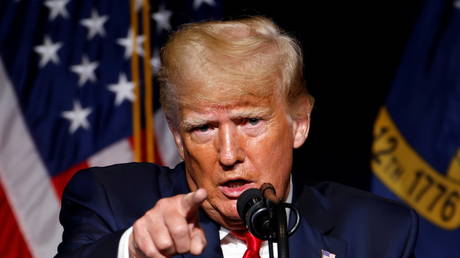 A fuming fundraising text from the National Republican Congressional Committee (NRCC) has angered Trump-supporting conservatives after it called them “traitors” for not donating enough money to the GOP.

“You’re a traitor,” the NRCC boomed in a mass text, presented as a message in defense of former President Donald Trump against supporters who had “abandoned” him.

The message, which was shared widely on social media, lambasted its recipients for doing “nothing” to help the Republican Party regain the House of Representatives and questioned whether Trump was “wrong” about them, before warning, “This is your final chance to prove your loyalty or be branded a deserter.”

These NRCC fundraising texts are getting intense pic.twitter.com/2Smm3NXCYy

“We’re giving you one final chance to stand with Trump. You only have 17 min,” the NRCC concluded, linking recipients to a donation page with a 17-minute timer.

The threatening message shocked many conservatives, including high-profile commentators like Mike Cernovich and commentator John Cardillo, who publicly complained to the NRCC on social media.

If only the GOP were as harsh on their opposition as they are on their donors who don't shell out enough https://t.co/5repyrSWDv

The @NRCC grifts with this text then sends the money to massive cucks like McCarthy, Cheney, and Kinzinger. pic.twitter.com/uEAqa6nnaL

Some also questioned whether the menacing strategy would even be effective on Trump-supporting Republicans, given the rift within the party.

“These NRCC text campaigns employ what is easily the cringiest and downright dumbest comms strategy I have ever seen,” weighed in Vish Burra, a staffer for Florida Congressman Matt Gaetz.

Burra also warned Republican voters that the money they send to the NRCC will be “sent to folks who voted for [Trump’s] impeachment,” and not necessarily politicians who were strong supporters of the former president.

Ironically, the NRCC revealed on Thursday that it had acquired a record amount of money from fundraising this year, pulling in over $105 million through September, which it boasted was “a massive 74% increase over last cycle.”

The NRCC is no stranger to controversy surrounding its aggressive fundraising tactics.

In April, the committee threatened “to tell Trump” that anyone who did not donate was now a “DEFECTOR” from the cause and had “sided with the Dems” if they didn’t make a new monthly recurring donation.

Last year, however, after conservative columnist Kurt Schlichter publicly called on the NRCC to stop its aggressive texts, the committee responded by calling Schlichter a “Karen” and boasted that one of its widely criticized messages had earned it $198,021.

HTC reveals the $499 Vive Flow, a tiny VR headset with some big tradeoffs