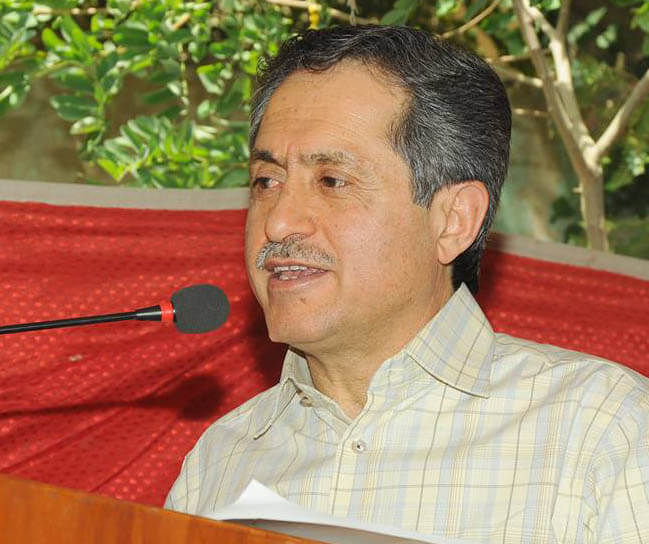 The Chief Justice has quarantined himself at home after the Corona test came back positive.

According to the sources, the condition of the Chief Justice is very good and he is conducting judicial affairs from home.

It is to be noted that Justice Jamal Khan Mandokhel is presiding over the bench in the case pending in the Balochistan High Court regarding Coronavirus.

BAGHDAD (AP) — Iraq’s currency ended its nosedive after a meeting between the Iraqi Central Bank head and a top...

President Joe Biden is greeted by Vice President Kamala Harris as he walks onstage to speak at the Democratic National...

Police have issued an urgent appeal for a mother wearing a yellow rain jacket in their ongoing search for missing...

WESLEY CHAPEL, Fla. (AP) — A Florida trooper was shot in the torso, and a suspect was fatally shot, during...

Karen Carpenter had a ‘quest for perfection’ in her music that ‘carried over in her life,’ says biographer

Armie Hammer sat down with Air Mail for his first interview in two years. (Photo: Tibrina Hobson/WireImage) Armie Hammer is...

Kit Harington and Rose Leslie are about to become a family of four! Harington, 36, announced that he and his...

Anna Kendrick was shocked by the success of her ‘Pitch Perfect’ cup song: ‘It’s a weird nails on chalkboard thing for me’

At MusiCares gala, Smokey Robinson celebrates ‘best friendship in history’ with original song for Berry Gordy: ‘You are so, so precious’

Melinda Dillon is snapped by the paparazzi in December 1988 in Hollywood, Calif. (Photo: Ron Galella, Ltd./Ron Galella Collection via...

Love thinks anyone could have coached the Eagles to the Super Bowl.

Chiefs star Patrick Mahomes gives his opinion on what made Tom Brady the greatest quarterback in NFL history.

NFL betting: Super Bowl referee Carl Cheffers has been good for under bettors

Cheffers is officiating his third Super Bowl in the last seven years.

What will the Jets do with Zach Wilson?

After a disastrous Thursday night start against the Jaguars in December, it appeared that the Jets and quarterback Zach Wilson...

Sean Payton’s contract to become the head coach of the Denver Broncos is now done. Payton has signed a five-year...

LeBron James said in October that he had “no relationship” with Kareem Abdul-Jabbar after some very public criticism.

Here's all the info you need to watch Super Bowl LVII.

Kyrie wants a trade, but it’s KD that teams want

Kyrie Irving’s trade demand rocked NBA circles on Friday, but he’s not the Nets star that teams are most interested...