LeBron James and others' focus on 1957 Jerry Jones photo obscures the point; it's about what Cowboys owner has done since

Australia T20 World Cup Title: Australia beat New Zealand by 8 wickets in the FINAL of the ICC Men’s T20 World Cup to clinch the trophy for the first time.

Aus easily achieved the target of 173 runs for the loss of 2 wickets in the 19th over, Mitchell marsh (77) and David Warner (53) were prominent. 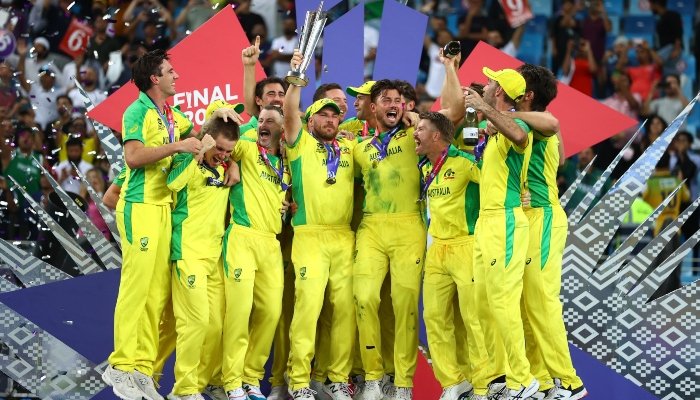 Australia captain Aaron Finch won the toss and invited New Zealand to bat first in the final played in Dubai.

New Zealand scored 172 runs for the loss of 4 wickets in the stipulated 20 overs, with skipper Kane Williamson on 85.

Batting first at Australia’s invitation, New Zealand scored 172 runs for the loss of 4 wickets in the stipulated 20 overs. This is the biggest total of any team in the T20 World Cup final.

New Zealand opened the innings, their first wicket fell for 28 runs as Daryl Mitchell returned to the pavilion for 11 runs.

After which captain Son and Martin Guptill took the innings forward. Guptill was dismissed for 28 as the team’s total reached 76 runs.

Despite falling 2 wickets, skipper Williamson did not take a cautious approach and scored the fastest half-century of the T20 World Cup final.

He scored fifty off 32 balls.

Skipper Williamson was dismissed for 85, besides Glenn Phillips for 18.

For Australia, Josh Hazlewood dismissed 3 players while Mitchell Starc made the most expensive spell of the T20 World Cup finals. Starc scored 60 runs in four overs.

The most expensive bowling in the finals before Starc was bowled by Sri Lanka’s Lasith Malinga in 2012, giving away 54 runs in four overs against the West Indies.

Australia easily achieved the target of 173 runs for the loss of 2 wickets in the 19th over, Mitchell marsh (77) and David Warner (53) were prominent.

Chasing New Zealand’s target of 173, Australia did not get off to a good start and skipper Aaron Finch was dismissed for 5 for 15.

After a wicket fell, David Warner and Mitchell Marsh showed responsibility to put on a 93-run partnership for their team.

As Australia reached 107, David Warner was bowled by Bolt for 53.

Australia’s Mitchell Marsh was named the best player of the match for his outstanding performance.

Australia’s David Warner was awarded the ICC Player of the Tournament award for his 289 in the World Cup.

Mitchell Marsh played an unbeaten inning of 77 to make Australia t20 champions for the first time.